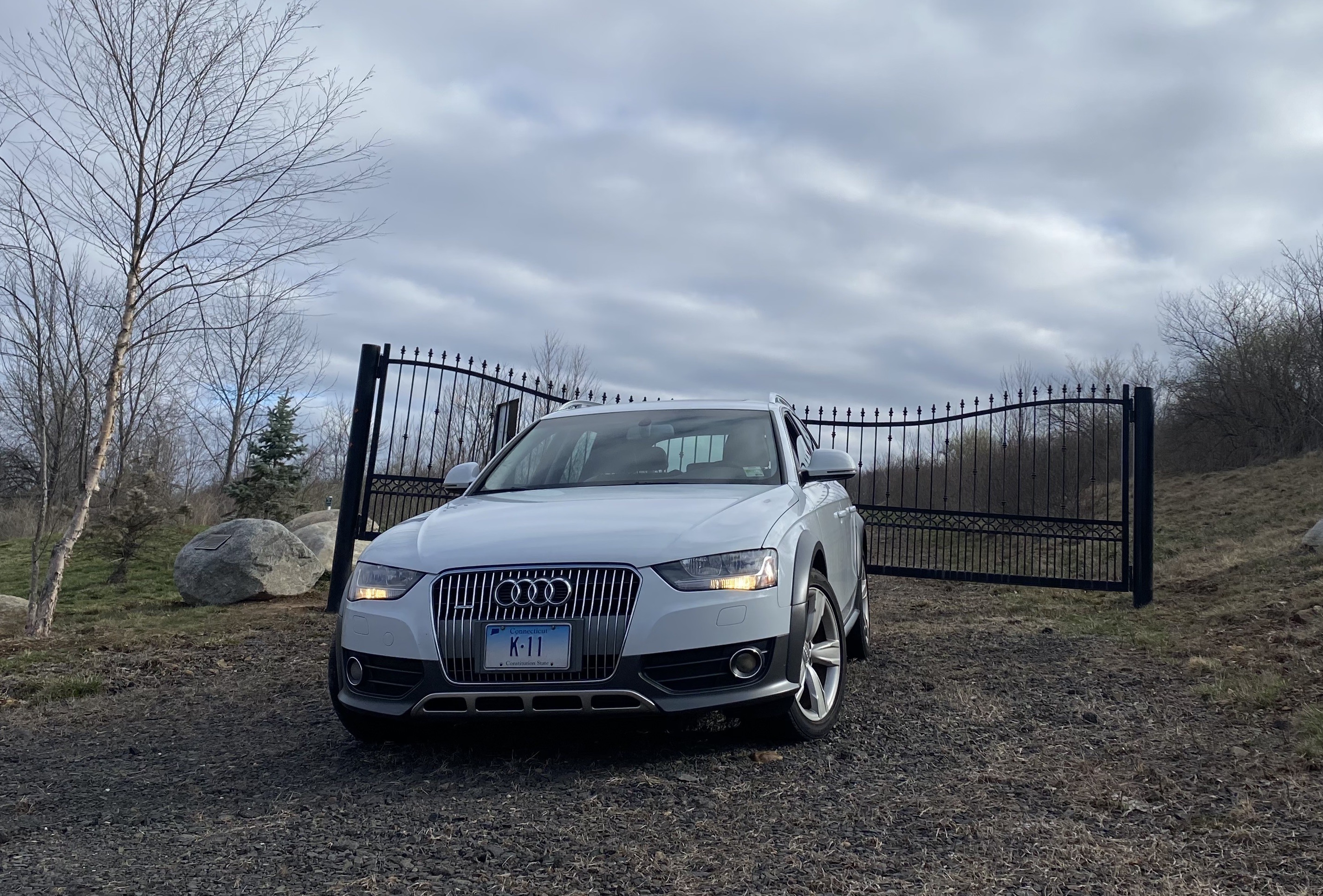 I love outdoor activities. Hiking, mountain biking, and kayaking are among my favorites. I also love driving. So my car needs to be a Swiss army knife of sorts… something adept at hauling family and gear but will also put a smile on my face when the road turns twisty. My current car of choice is a 2013 Audi allroad… it’s a cool longroof that does all the things I need it to do.

In this article, I’m going to tell you what it’s like living with an allroad. I’m not going to tell you about the wheelbase, horsepower, tire size, etc. If you wanna learn about specs, read Car and Driver’s review.

Full disclosure. I love all wheel drive wagons. My whip previous to the allroad was a 2003 Subaru Forester XT. Check out my review of that car here.

And my dream car is an Audi RS6 – one of the fastest Audis. Supercar performance out of an AWD station wagon? Swoon…

AWD longroofs, to me, are the shit. The cat’s ass. They’re all that and a bag of chips!

Because they do everything I need a car to do.

They have the utility of an SUV, handling of a car, AWD for bad weather and offroad surfaces, room for my family, and reasonable gas mileage.

In 2013, Audi introduced the Allroad on American soil. It replaced the not-so-popular A4 Avant wagon.

Subaru wagons sell very well in the states. Part of Subaru’s wow-factor is their higher ground clearance and rugged looks.

So Audi (not so originally) made the A4 Avant a little taller, added fender flares, added some cool-looking stainless steel body cladding, and gave it a rugged name – the allroad.

The result? A sexy longroof.

This car has a presence. I remember the day I went to go look at mine on the used car lot. It was parked amongst the other cars and it just stood out. It was a smoodge taller than its lot mates. It’s fender flares made it look a little intimidating. And the style of the wheels makes them look large and deep.

The car looks classy, fast, and rugged… all at the same time. I was smitten.

I get more compliments on this car than any other car I’ve ever owned.

Part of the reason is that allroads are fairly rare. You just don’t see many of them on the road so they stand out and seem exclusive.

Another reason is that the allroad looks expensive (or at least some people think it does). That presence I discussed early makes people think it’s a pricey car.

The funny thing about the value of an allroad is that when I bought this car, I was actually in the market for a third generation Subaru WRX hatchback. My allroad cost me $5-8,000 LESS than what I would have paid for a comparable-condition WRX.

But because it has leather seats and 4 rings on the grill, people think it’s a fancy-schmancy car.

I get it. But I personally don’t like the glances I get from people who are thinking “must be nice.” (full disclosure, I’m broke AF!)

I’m pretty sure nobody would look at me driving a WRX hatch and assume I was rich. Ever.

The allroad’s interior is pretty awesome. 4 adults fit comfortably. It’s not roomy, but it’s certainly not cramped. Front and back seats are very comfortable.

Interior materials scream quality and are every bit Audi. The leather steering wheel is perfectly plump and feels good in your hand.

This is gonna sound weird, but even the back part of the steering wheel feels good. Specifically, the backs of the steering wheel prongs. My fingers often find their way back there when they get bored driving on the highway. They are greeted by a rubber material that’s not too hard and not too soft. And it has a nice tactile feel to it.

Most cars just have cheap-o hard plastic back there.

I know. It’s silly. Who cares what the back of the steering wheel feels like?

I didn’t think I did.

But after driving my allroad, I notice it.

Small details like this are indicators of how well-thought-out Audi’s interiors are… with both materials and design. I love it.

What I don’t love on this longroof is the center control panel. Controls for the radio, heating, AC, phone set up, etc aren’t the most intuitive. My allroad is the base model – the premium. The premium plus and prestige packages have a higher-tech setup on the dashboard and center console that may or may not be easier to use.

I also don’t love how buttons and controls are backlit in red. There’s even a downward pointing red spotlight of sorts to gently illuminate the center console at night.

I’m sure there’s some logic behind it. Perhaps the red light makes your eyes sharper and more focused on the road for nighttime driving? Seems possible.

But to me, the red light makes me feel like I’m inside Darth Vader’s helmet… which is arguably pretty cool. So maybe the imperial red lighting isn’t all that bad after all.

Interior lighting when you open the doors at nigt is pretty awesome. Roof-mounted lights are very bright and each foot well (back seat included) is well lit.

One detail I love that may be fairly standard on cars these days (but I’m unaware of it because I’m an uncultured swine) is the puddle lights. When you open the allroad’s doors, there are downward-facing spotlights on the bottom of each door panel. These lights illuminate the area you’ll be stepping into when you get out of the allroad. It’s friggin’ genius.

Here’s where having a longroof comes in handy. Cargo space in the back is generous. However, it’s far from cavernous. A sloping roofline and rear seats that angle back do get in the way. I guess it’s the price we pay for beauty and comfort.

Regardless, an all-open space in the back is better than a conventional trunk any day of the week. This car can easily handle a trip to the local warehouse club and gobble up a few cases of vitamin water, seltzer, and a couple jumbo warehouse packs of paper towels and toilet paper.

Fold down the rear seats and here’s where the allroad shines.

My partner is an estate sale junkie and we’ve slid more than one of her estate sale furniture “finds” easily into the back of the allroad.

Seats down also makes room for our paddles when we go kayaking.

Longroof means space to haul stuff. The allroad has standard chrome roof rails that not only look great on the car, but also add functionality.

I have the Audi crossbars that allow me to throw a pair of mountain bikes on the roof OR a pair of kayaks.

Yes, an SUV does the same thing… but hoisting a kayak up onto the higher roof of an SUV is something my aging back isn’t too excited about.

If you’re reading up on this car, most of the auto journalists out there are going to complain about body roll from the extra height, it’s not very fast, yaddah, yaddah, yaddah,

Is it a Corvette? No.

What this little longroof is, though, is a little bit of both.

This car is quick (but not fast). I think 0-60 times are in the low 6 second neighborhood… which is respectable. The 2.0T is the same engine used in a Volkswagen GTI and it delivers similar performance. The auto journalists call a GTI “a little rocket ship” but the allroad is sluggish.

Want to know why? Because an Audi is better built than a VW. The Audi is refined. It handles the speed better. Better materials and better engineering allow the Audi to put the power down to the road without having g-force throw you into the seat when you step on the gas.

And while we’re on the topic of a refined cabin…. This little longroof stays poised and comfortable at high speeds – almost to a fault. It’s easy to glide past 80 mph and not realize how fast you’re going. A comfortable ride and minimal road noise can lull you into unsafe speeds. Be warned.

This longroof is a blast to drive on a twisty back road. Throw it into sport mode and the car holds on to lower gears longer.  This keeps responsive power on demand without having to wait for a downshift.

Despite the added ground clearance, the A4 feels fantastic taking corners. And of course, Quattro all wheel drive makes the allroad nice and grippy.

Some say an A4 sedan handles much better than an allroad.

I disagree. The allroad has something the A4 does not – width.

The engineers at Audi knew that they would lose some handling characteristics by giving the allroad extra ride height.

So to compensate, they added width.

How’d they do it?

So those fancy wheel flares actually serve a purpose. They’re not just cladding to make the car look rugged… they are actually covering the wheels because they sit out farther than what a conventional A4 body could cover.

But is this longroof really an “All Road”?

As we discussed earlier, the allroad is meant to have a similar rugged appearance of a Subaru Outback. But is it really an off road car?

What I’ll say is this… my travels take me to a lot of trailheads and kayak dropoff points that aren’t perfectly paved. Most of the time I’m confident driving over the occasional root or rocky road. Rarely am I concerned with bottoming out like I have been in the past with different cars.

But can you drive the allroad on the beach or follow your buddy with a jeep down a sketchy-looking fire road?

Probably not a good plan.

One thing to note is that this AWD longroof  is amazing in the snow. I live in New England and winters get dicey here… so AWD is important to me.

None of them could come close to how well my allroad tracks in the snow. The combination of traction control, stability control, and quattro AWD keep the Audi straight when things get slippery. And it never slips when looking for traction.

As with so many turbocharged small engines, the allroad’s turbo-4 requires high octane fuel. It’s 91 or better for the allroad.

The tradeoff is good mileage. On the highway I’ve actually averaged 30 MPG a few times when I drive like a civilized human. And around town, I get between 20 and 24 MPG depending on the weight of my foot.

One Gripe About this Longroof

I love this car. But there is one gripe that makes me nuts.

But to Audi, it’s acceptable.

In all the cars I’ve ever owned, I’ve never had one go through so much oil.

Even my 1980 Camaro that slowly dripped oil every night in my parents’ driveway (sorry mom and dad!) never went through that much oil.

The 2013 allroad may not excel at anything. But it does A LOT very well. It’s fun to drive. It can transport my family in comfort. Its cargo space and roof rack are large enough to haul my outdoor sports gear. It’s got a little extra ground clearance to make me confident I won’t bottom out in a bumpy trailhead parking lot. And it looks damn sexy. I love my allroad. And If you’re at all like me, you’ll love it too.