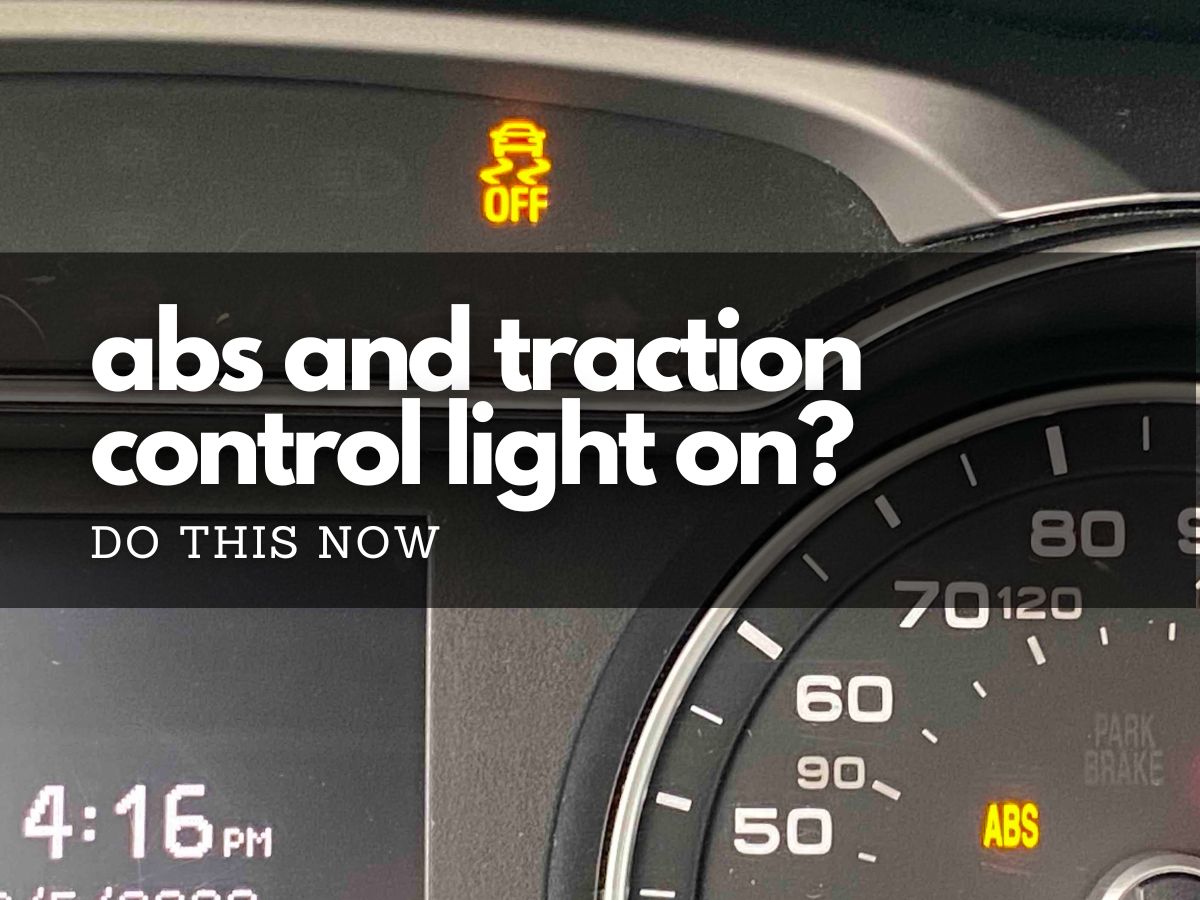 If you have both an ABS and traction control light on, it most likely means one or more of your car’s speed sensors are bad. In this article, you’ll learn how to diagnose the problem, get it fixed, and get back on the road with no stressful dashboard warning lights staring back at you.

What to do as soon as you see your ABS and traction control lights on:

Second, don’t do stupid shit like pull over, shut off your car, and hope that when you restart it, the lights will magically go away.

The good news is this: these lights don’t mean something is urgently wrong with your car. When they come on, there’s no need to pull over or stop driving. You can continue to drive your car with confidence.

Here’s what I recommend  you do when your ABS and traction control lights come on:

As soon as it’s convenient for you, diagnose the problem with an OBD (On Board Diagnostic) scanning tool. If you don’t have one of your own, ask to borrow a friend’s OBD scanner. And if you don’t have any friends, just about every major auto parts retailer will do a free OBD scan for you. Stores like  Advance Auto Parts, Auto Zone, and O’Reilly can help you out.

And if you don’t live near a major auto retailer, a local mechanic or car dealer can perform a scan. Just keep in mind that mechanics and dealers will most likely charge a fee to do a scan.

Is it safe to drive with my ABS and traction control light on?

Yes, it is safe to drive with your ABS and traction control lights on.

But it also isn’t bad.

Before I explain why, it’s important for you to understand what ABS and traction control do. So here’s a quick overview of each.

ABS stands for antilock braking system. As you can probably guess, the system prevents your brakes from locking up.

Why is this so important?

Let’s say you’re driving down the road at a good rate of speed and a bunny jumps out in front of your car.

As any lover of bunnies would do, you slam on your brakes to avoid ending said bunny’s life.

In a car without ABS , the brakes will lock up, and the car will go into an uncontrollable slide. You’ll lose the ability to steer the car, and you might run over the poor little bunny. Murderer.

But if the car has ABS, a computer takes over, stops the car with maximum force, and won’t allow the brakes to lock up. Your car will not only come to a stop sooner, but it will also retain its ability to steer…. So you’ll be able to steer around your little bunny friend and avoid hitting him.

Here’s a great video that shows the how beneficial ABS is in an emergency situation:

What is Traction Control?

Traction control prevents your car from having uncontrolled wheel spin.

You’ve probably been in this situation once or twice…. You’re driving in snow, ice, or mud, and no matter how hard you try to make your car move, all the wheels do is spin.

Traction control senses the speed of the wheels and compares it to the speed the car is moving and either applies the brakes or reduces engine power so that the wheels don’t spin.

Traction control is not just for situations where you’re stuck.  Consider this….

If you’re at a stoplight in a snowstorm and the light turns green, even the smallest touch on the accelerator can make your wheels spin and  your car might begin to slide.

Traction control can also help in circumstances when you’re traveling at a high rate of speed.

For example, imagine you’re  driving on the highway at 55 mph when you come across an unexpected ice patch.

If you hit the ice going 55 and your drive wheels start to spin because they lose traction, your car may slide and lose control.

But with traction control, your car will sense the wheels spinning too fast and will automatically slow them down, preventing your wheels from rotating at a speed faster than the speed your car is moving.

Is it safe to drive with my abs and traction control light on?

As a reminder, if your abs and traction control lights are on, it means both systems are not working.

Is your car safe to drive?

However…. Don’t wait too long to fix the problem.

Both systems aren’t critical to the operation of your car.

But these safety systems come in very handy when you find yourself in an emergency situation.

You don’t need them until you need them!

We never know when a dangerous situation will present itself. And it makes good sense to be ready for an unexpected emergency if one should come your way.

Bottom line, there’s no need to pull off the road or head straight home when you see an  ABS and traction control light on. Just don’t put off fixing the problem for too long.

Do I have to fix both my ABS and traction control systems?

Don’t get all freaked out because you have two dashboard warning lights. It doesn’t mean you have a double repair bill!

The reason why both your ABS and traction control lights are on is because both systems share the same speed sensors mounted inside each wheel.

So when one of these wheel sensors goes bad, BOTH systems can’t function.

An ABS and traction control light on almost always means your car has a bad speed sensor in one of your wheels.

What is the wheel speed sensor replacement cost?

Depending on your car, speed sensors are pretty cheap. New wheel speed sensor cost is usually between $20 and $50.

And they are pretty easy to install. If you are a DIY’er, you’ll have no problem doing the job on your own. Just a word of caution…. Sometimes they can rust in place and can be a challenge to remove. Google a couple how-to videos to see what you’re up against. Assuming there’s no rust, you can probably complete the job in around 30 minutes.

If you’re not a DIY’er, it’s a pretty easy job for your mechanic and certainly won’t break the bank. In addition to the cost of the part mentioned earlier, you’ll probably have to pay for 30 minutes to one hour of labor per speed sensor.

If you have an ABS and traction control light on, it most likely means you have a bad wheel speed sensor. It’s an inexpensive part and is pretty easy to fix. It’s not something that needs urgent attention, but you shouldn’t wait too long to get it fixed. These two safety systems can save you from losing control of your car when you least expect it.

Other articles of interest:

Why a blinking check engine light is bad news

If Your Service Engine Soon Light Turns On, Don’t Panic