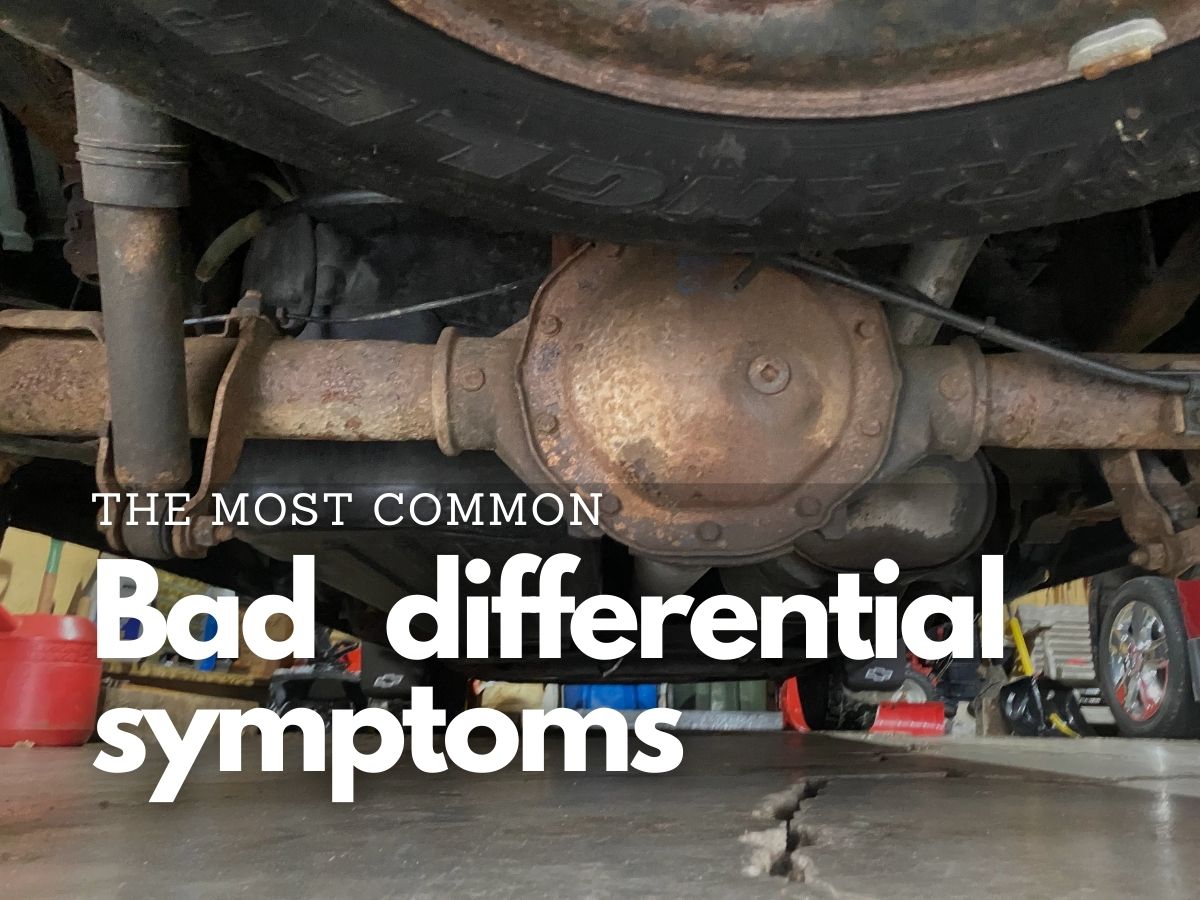 If your car is doing something weird and you suspect you have a bad differential, you’re going to  love,or more likely, hate, this article. In it, you’ll  learn about the most common bad differential symptoms.

First things first: a bad differential is no joke. It’s a problem you should probably fix right away. The longer you wait to have it fixed, the worse (AKA more expensive!) the problem can become.

I’ve had the not-so-fun experience of having a differential go bad while driving on the highway.

Don’t worry…. It wasn’t in my car. I was borrowing my dad’s Chevy Silverado.

It was so bad that the differential caught on fire!

I’ll explain what happened later. After all, you didn’t click on this page to read about my problems. You’ve got bad differential symptoms you need to deal with. So let’s get to it….

What is a differential?

It’s important to start by explaining what is a differential. This topic could be an entire article on its own. A differential is an amazing piece of engineering that many of us drivers take for granted.

I’m not going to explain what is a differential with my boring-ass words. Instead, watch this video made by Chevrolet in 1937.

Even with all the amazing technology we have today, nothing compares to this.

Seriously! I challenge you to find something better.

IMPORTANT NOTE… the video starts out with some boring (and kind of laughable) motorcycle “stunts” that go on for about two minutes.

Sure, middle school kids are doing crazier stunts on their BMX bikes these days.

But the stunts in this video were X-Games quality back in the 1930’s. Chevy put this segment in to add some flare to the video.

If you start watching and can’t take it anymore, just fast forward to about 1:50.

Now that you know all you need to know about differentials, let’s take a look at bad differential symptoms.

The most common bad differential symptoms are:

Any time your car starts making unusual sounds, you should give it attention.

In the case of a bad differential, it could be a variety of sounds. Most often, you’ll hear a grinding noise.

When the differential went bad on my dad’s truck, the noise it made was absolutely demonic.

It sounded like someone threw a handful of nails into a blender.

There was no mistaking that I needed to pull over ASAP.

Whirring or whining sounds can also be symptoms of something wrong with your differential.

To give you an idea of what the whirring sound is like, check out this video:

There’s also a chance that you’ll only hear unusual sounds when you take a corner.

Your differential is made up of a complex gear system.

If something goes wrong in this system, there’s a good chance you’ll start to feel some vibration in your car.

And just like what you just learned about unusual sounds, the vibration may only happen when you go around corners.

When the differential went bad in my dad’s truck, the vibration was jarring. It felt like I was driving on a rumble strip.

Your experience may not be as intense. But if you start to feel vibration when driving, you should have it checked out asap.

This bad differential symptom is more subtle than the ones you just learned about,

If you notice your differential leaking, it requires attention. The end.

While it may not be as urgent as the last two bad differential symptoms discussed in this article, you shouldn’t delay in addressing the leak.

Because if you let it go for too long, you run the risk of running completely out of fluid, which will lead to big problems.

The differential in my dad’s truck wasn’t leaking to my knowledge, However, I suspect something happened that caused it to lose all its fluid while I was driving. This led to unlubricated gears turning at highway speeds… which ended up destroying the differential.

After watching the 1937 Chevy video, you know a differential allows your car’s wheels to rotate at different speeds. If something goes wrong with your differential, it may lose its ability to do this. And when you go around a corner, your wheels may start to skip, hop, or give some noticeable resistance that will affect how your car handles.

The skipping will vary depending on how severe your problem is and how sharp of a turn you are taking.

To illustrate, if your differential problem is slight, you may not even notice any skipping when you travel over bends in the road. But if you take a sharp 90 degree turn into your driveway, you might notice some skipping then.

If your differential has big problems, you’ll feel it every time you take a turn – no matter how big or small.

If one of your tires is skipping or hopping every time you take a turn, it’s going to wear out.

That said, if you notice one of your tires wearing down at a different rate than its opposing tire, there is a chance the wear is being caused by a bad differential.

As I’ve already stated, I had the unfortunate “pleasure” of experiencing a differential going bad while driving on the highway.

Because it happened to me in a vehicle I didn’t drive on a regular basis, I wasn’t aware of any bad differential symptoms.

Had it been my own car, I may have noticed some of the symptoms mentioned in this article

But I didn’t. And the result was a catastrophic failure.

When I pulled off the highway, the differential was on fire. Luckily the entire truck didn’t go up in flames.

Unfortunately, the entire rear differential had to be replaced. It ended up costing my father thousands to repair.

So don’t ignore bad differential symptoms. If you do, you might have to deal with expensive repairs and safety issues.

All the symptoms. discussed in this article could  be bad differential symptoms. But they could also be signs of other problems. That said, any time your car starts doing something weird, get it checked out. And if it turns out to be a problem with your differential, stop driving and get it fixed as soon as you can.