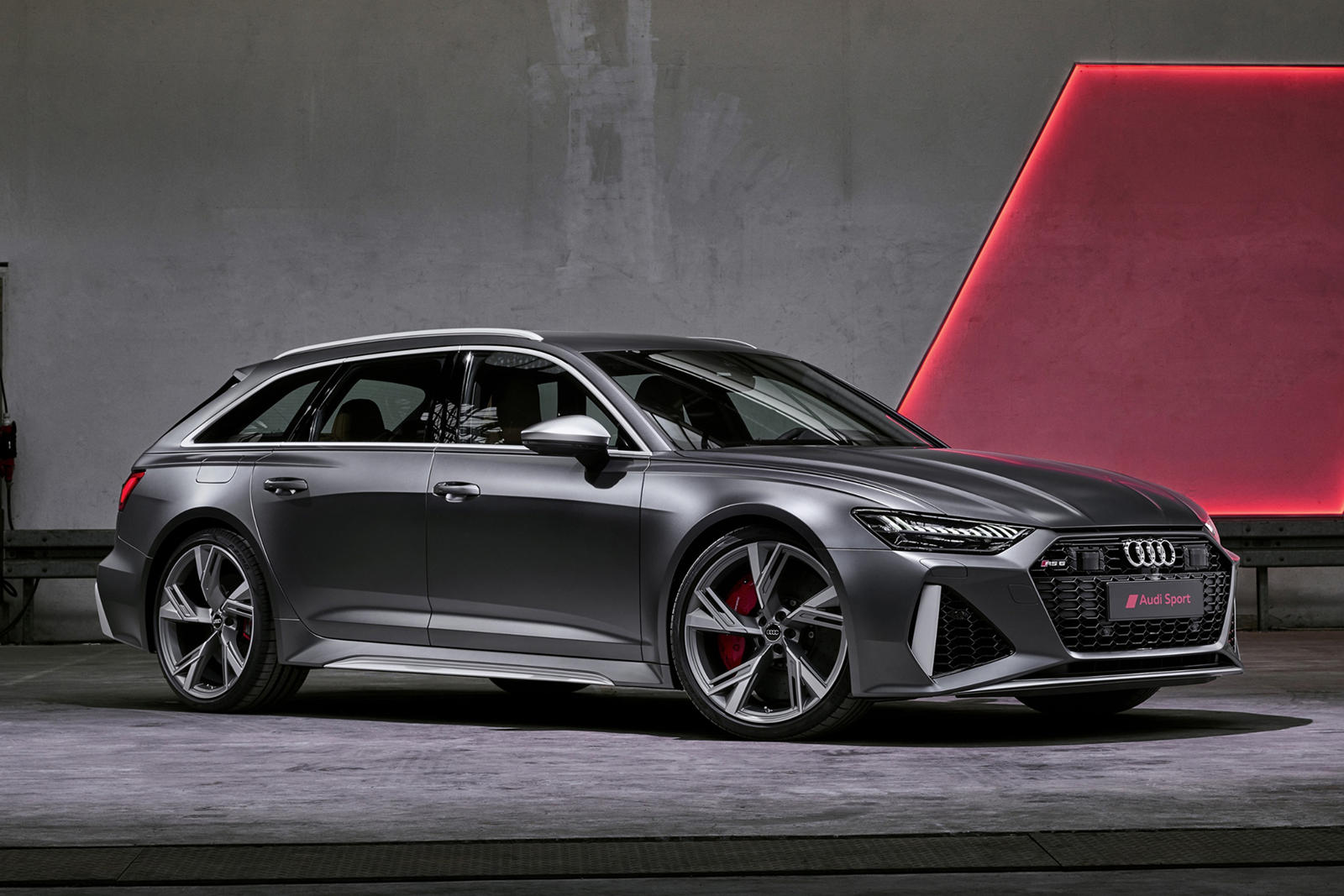 Audi makes some very fast cars. And I’m not even talking about supercar R8 models. Many of the fastest Audis are unassuming sleepers that are often faster than traditional sports cars like Corvettes, Porsches, and even Ferraris.

I’m going to keep this article brief. I will not be going into crazy detail about each car. So we won’t be talking about nitty-gritty stuff like brake rotor diameter, cubic feet of cargo space, or tire size.

You found this article because you want to learn about the fastest Audis… so that’s what we’ll focus on: speed. Specifically 0-60 time. It’s the most fun speed metric that we all can experience legally.

You may know that Audi’s high performance cars come in two flavors – RS and S. But do you know the difference between the two?

Audi has 2 designations for their high performance cars – S and RS. S models are basically a step-up in engine and performance from Audi’s standard models. S cars are built in the same factory as standard Audis.

RS cars, on the other hand, are built in a different factory by Audi Sport GmbH which is a private subsidiary company of Audi. RS stands for RennSport which translates to “Racing Sport.

Audis built in the Audi Sport factory are engineered to have superior performance over their stock brethren and are akin to BMW M cars and Mercedes Benz AMG cars. RS cars are often more suitable for track use and are less plush and luxurious than standard and S model Audis. If you want to learn more about Audi S and RS, check out this article on Wikipedia.

Before I get into the list, it’s important to note that I’m excluding R8 models from this list of the fastest Audis. R8s are in a different league. With sticker prices that can go north of $150,000 and super car performance numbers, R8s are exotic super cars.

Think of the R8 like the standout superstar kid in a family of amazing children.

It’s the child who graduated Harvard and now pitches for the Yankees. Your friends fall all over him and want to take selfies with him when he shows up at a family picnic.

Sorry R8. We all know you’re awesome. Let your siblings have the spotlight for once.

Audi produced the first RS car in 1994 –  the RS2 Avant (wagon). It was a legendary collaboration between Porsche and Audi. The car had 311 horsepower and went from 0-60 in 4.8 seconds.

These were absolutely bonkers numbers for 1994. Even more bonkers because they were coming out of as station wagon!

The RS2 was never offered for sale in the US. It took nine long years for the United States to get our first taste of Audi RS…. and it was amazing – the 2003 Audi RS6.

That’s crazy speed in 2003. And it was coming out of a 5-passenger luxury sedan that looked a lot like the everyday Audi A6 it was based on.

The RS6 only lasted 1 year in the USA. Seventeen years would pass before the RS6 showed up in American Audi showrooms again.

During its absence from America, the RS6 was still being produced by Audi Sport. Thanks to the internet, Americans knew of this car’s existence and mind-blowing performance for years.

Our wishes for one of the fastest Audis came true in 2020.

And looks that will literally turn heads.

What else is there to say?

Um….a $109,000 base price is a barrier for some people. But Hell, give it 5 years and you can probably find a used one that’s a bit more affordable.

The RS4 stuck around for another model year and posted the same power and performance numbers. The big news for 2008 was the addition of an RS4 convertible. Only 300 of the convertibles were brought  to the US for 2008.

Convertibles being convertibles, added bloat brought performance numbers down a tad. 0-60 on a 2008 RS4 Cabriolet took .2 seconds slower than the sedan at 4.8 seconds. Convertibles were also more expensive — MSRP was a whopping $85,000.

Legend has it that American TT fans made so much noise about the TTRS on social media that Audi listened and sent the car our way. The only two seater on this list of the fastest Audis had a 2.5-liter inline 5-cylinder turbo under the hood. It turned out 360 horsepower and went from 0-60 in 4.0 seconds.

The 2013 model year was largely unchanged.

The TTRS disappeared for a couple years in the US and came back in 2017.

The TTRS returned in 2017 sleeker and faster. This time around, the tried-and-true inline turbo 5 was pushing 400 horses and propelled the TTRS from 0-60 in just 3.4 seconds.

The 2018 TTRS model was unchanged.

In 2019, horsepower was decreased slightly to 394 and some amazing colors were added like Kyalami Green.

Despite its strong performance numbers, the RS5 received “meh” reviews in America. For less money, you could get better performance elsewhere. The two-door sports coupe market is a tough ring to fight in on American soil because beloved models like Mustang, Camaro, and Challenger rule the road.

The RS5 came back in 2014 with similar performance numbers. The big news was the addition of a topless option – the 2014 Audi RS5 Cabriolet. An additional $8,300 would get you the drop top option.

2015 brought little change for the RS5… and this member of the fastest Audi club was becoming status quo. It took a break for a couple years and returned to America in 2018 with a vengeance

For 2019, powertrain didn’t change at all, but Audi introduced a Sportback version of the RS5 which is essentially a long hatchback.

It also had 4 doors.

This was huge news, because the RS5 Sportback was Audi’s first high performance sports SEDAN to be offered in America since the RS4 left us in 2008.

Look out M3. Audi is coming for you.

The extra doors, a little more length, and some height for extra headroom in the back seat added bloat to the RS5 Sportback. The result is an extra .1 second on the car’s 0-60 time. Yes, it kicks this RS5 down on the list of fastest Audis, but it’s a small price to pay for the added practicality.

2014 brought  the RS7 to American shores. One could consider the RS7 the automobile equivalent of Shaquille O’Neal (during his prime) in a tuxedo – large, athletic, classy… but, in a split second, could turn into an impish child who could overpower just about anyone in his path.

The RS7 is a massive luxury car with even bigger performance.

What happens when our Shaq-in-tux blows a few lines of coke?

You get the Audi RS7 performance.

Arguably the most exciting car on this list of the fastest Audis is the 2017 Audi RS3. It’s the lowest-priced RS model we’ve discussed and it is among the fastest.

With a turbocharged 2.5-liter 5 cylinder engine, it produces 400 horsepower and makes the 0-60 sprint in just 3.6 seconds. Amazing performance for a relatively low base price of $55,450.

Yes, the RS3 is on the small size, but it has 4 doors and could make a great every day driver.

Last but not least, we’ll look at Audi’s first RS SUV offered in the US.

It’s no secret that SUVs are the kings of  US roads. And Audi is well aware of this. Their Q line of SUVs has been extremely successful. So why not add an RS-version?

It’s got the twin-turbo 4.0-liter V8 under the hood and it will propel the SUV from 0-60 in 3.6 seconds. This ultra luxury performance monster shares a lot of components and even sits on the same frame as its corporate sibling, the Lamborghini Urus.

So there you have it. A complete history of the fastest Audis sold in America.

If I could have my pick, it would be the 2020 RS6. Neck breaking performance, room for a family, and a fair amount of cargo space. It truly does it all. Can anyone spot me $109k?

Summary of the Fastest Audis in America