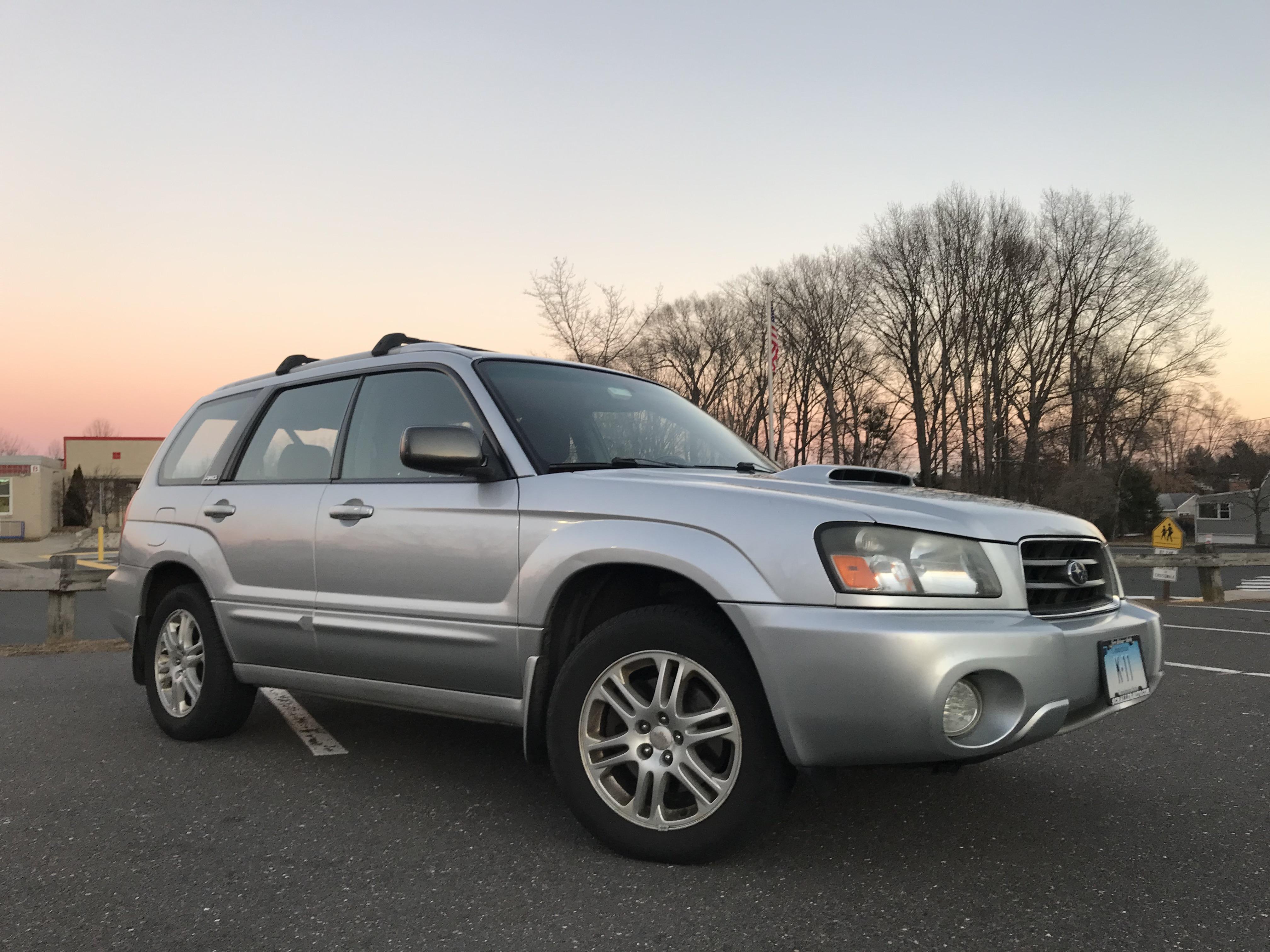 The 2003 SubaruForester XT 0-60 time is legendary. Car and Driver did a review of this car in 2003 and reported a 0-60 time of 5.3 seconds, proving this little grocery getter is one of the fastest Subarus ever produced.

In the very same issue, Car and Driver reviewed the $89,000 Porsche Cayenne Turbo and it was only .3 seconds faster in the 0-60 sprint.

Yes, there’s a decimal point in front of that 3.

But back in 2003, when a boxy station wagon could lay down times that could keep up with a Porsche…. It caught the attention of gearheads everywhere.

I had the pleasure of owning one of these legendary cars for a number of years. In this post, I’ll give you an honest owner’s review. If you have any questions about life with one of the fastest Subarus, feel free to leave them in the comment section.

Back in the day, station wagons got a bad rap. This happened because wagons were token family haulers and therefore lame.

It’s a lot like what goes on today with minivans. There’s a similar stigma. A minivan’s utility and cupholder count can’t be rivaled. But if you pull up at your local cruise night in a Toyota Sienna, you won’t be catching many admiring looks.

All of a sudden, wagons have become super hip and are the most popular type of car on US roads. They’re called SUVs.

An SUV is nothing more than a station wagon with big tires and more ground clearance.

But the funny thing is, Americans don’t like car-based station wagons.

I find this a little perplexing. Conventional wagons give the utility of an SUV and many have all wheel drive. You also get the perks of a car-like handling and better gas mileage.

But people won’t buy them.

The most common thing I hear is that drivers feel safer in an SUV. The taller ride height and added bulk make drivers feel more secure on the roads.

Enough about wagons in general, you’re here to learn about the 2003 Forester XT. I’m not going to go into crazy detail about all its features and specifications. There’s plenty of articles out on the web that discuss these things. What I’m going to do is talk about what it’s like to live with one of the fastest Subarus.

This little Soobie ain’t much of a looker. Whenever I had to direct someone to find my car, I would tell them to look for the refrigerator with wheels.

The only cool thing that it has going for it is the hood scoop.

The scoop is fully functional and force feeds cool air on to the intercooler…. But cool as it may be, it looks a lot like one of those stick-on hood scoops that the wannabe racer boys buy in their local WalMart auto aisle.

In addition to the scoop, it has a few other things that are unique to the XT model:  chrome-finished roof rails, bigger tires and wheels, and a chrome-tipped, larger-diameter tailpipe.

I always wished Subaru did more in the styling department to make the XT model stand out as one of the fastest Subarus. Fender flares and an aggressive nose would have made a world of difference.

Inside the 2003 Subaru Forester XT

The interior does what you need it to do. I didn’t love it, but I didn’t hate it either.

The boxy design also offers up tons of head room, shoulder room, and cargo space. When you pop the back open and drop the seats, it’s like you’re loading a little box van.

One thing about the inside of this car that always struck me was the visibility. Its refrigerator-inspired styling provides a cockpit that is surrounded by a lot of glass.

The first time you put this car in reverse and turn around to look behind you, you’ll be floored by how much you can see. It’s a lot like the visibility you have in a convertible with the top down. Seriously, it’s kind of amazing.

Speaking of the convertible experience, another standout of this fast Subaru is its massive sunroof.

The long roof free of bends and aerodynamic styling allows for an opening that is the size of 2.5 normal sunroofs. It’s so big that your passengers in the back seat will also be able to enjoy some of the open air experience.

So I guess the Forester’s boxy design offers some great advantages: Tons of room, great visibility, and a sunroof the length of a Mini Cooper are pretty awesome.

It’s basically the same 2.5L motor found in the 2004 WRX STI, just with a smaller turbo and intercooler. The factory claimed 210 horsepower, but there’s many theories out there that say this number was wrong. Legend states that the Forester XT’s horsepower was understated by Subaru on purpose in an effort to not have the 03 Forester XT outshine the standard WRX (with a smaller 2.0L engine), which generated 227 HP.

Supposedly 250 HP is closer to the right number for the Forester XT. But don’t quote me. My source is the rumor mill and Subaru forums on the web.

The Transmission: a key part of being among the fastest Subarus

The legendary performance numbers earned by the 2003 Forester XT have one critical piece that not ALL of these cars have: the 5-speed manual transmission.

The automatic, on the other hand, is a dog. You might as well be towing a boat.

I’ve driven both the automatic and the manual 2003 Forester XT, and here’s my observations…

Flooring it from a dead stop provides an exhilarating experience. The power delivery is immediate and urgent. There’s zero turbo lag.

This car is FAST. So fast, in fact, that you pretty much don’t give a shit that you’re driving a refrigerator with wheels when you experience its acceleration.

The automatic, on the other hand, is just dreadful. If you floor it from a dead stop, the turbo lag rears its ugly head. It takes what feels like a full second before the turbo kicks in and launches the car. When this happens, you’ll be smiling ear to ear, but the pause it takes to get there is bothersome.

The other thing I didn’t like about the automatic gearbox is that it always wants to reach 4th gear as fast as it possibly can.

So under normal driving, you’re generally in a high gear and sitting low in the rev band.

This creates a driving experience that you really need to adjust to…. and here’s why: Under normal driving, you’re generally sitting low in the rev band. When you call on the power, you have to wait for a downshift, then wait for the turbo, then you get the violent launch.

This process isn’t smooth and it provides a somewhat hard-to-handle driving experience.

When that turbo kicks in, the car lurches forward with quite a bit of force.

I know… it sounds like fun on paper, but if you’re not ready for it, you can lose control of the car.

At the end of the day, automatic-equipped models of this car really need a more sophisticated slushbox.  Adding a simple sport mode would have made a world of difference.

Any car falling under the category of fastest Subaru is going to be fun to drive. But keep in mind, this car isn’t a true sports car. It’s a competent, solid everyday driver with an amazing motor.

The fun in owning a 2003 Forester XT lies in a straight line. The car is like a guided missile…. point it at something, mash the accelerator to the floor, and hold the F on.

What about driving it on a windy back road?

The copious body roll caused by the car being top-heavy puts a damper on the fun.

If you look at station wagons as a spectrum, Subaru Foresters  tend to lean closer to the SUV side than the sport wagon side.  The Forester’s extra ground clearance and tall roof give the car a high center of gravity. So cornering isn’t this car’s “thing”. Granted, it will handle better than most SUVs, but despite being one of the fastest Subarus, this car is no Audi RS6 on the back roads.

Should I buy a Forester XT?

Yes. Don’t even think about it. You’ll have zero regrets owning one of the fastest Subarus ever made.

Thanks to its WRX brethren, there’s no shortage of modifications you can do to this car. Bigger turbos, lowering, computer flash…. It’s actually quite easy and cheap to turn one of these cars into a (bigger) beast.

An unfortunate side-effect of this abundance of affordable aftermarket mods has led to the bastardization of an already short supply of 03 Forester XTs. Finding an unmolested model is getting harder every day.

If you’re in the market for one of the fastest Subarus (that isn’t a WRX)  and you come across a clean, unmolested 2003 Forester XT, grab it! You won’t be disappointed.

2 thoughts on “One of the Fastest Subarus: The 2003 Forester XT”