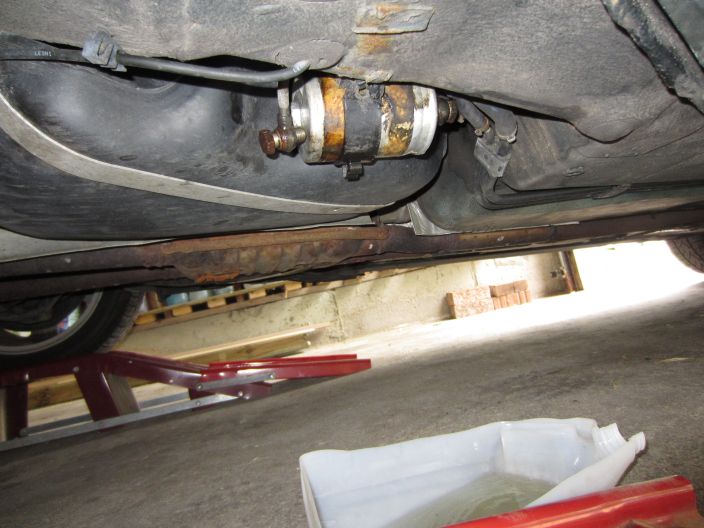 Is your car running like crap? Does it hesitate when you try to pass another car on the highway? Is it hard to start? These are all signs of a clogged fuel filter.

Before we look at the main signs of a clogged fuel filter, you should understand what your car’s fuel system does and what role a fuel filter plays.

At a very high level, your fuel system is a supply line (hose) and a series of components that  work together to move fuel from your gas tank to your engine.

If your fuel filter becomes clogged, it causes a blockage in the fuel line, restricting the flow of gas to your engine.

Think about it this way… have you ever drunk a smoothie through a straw and suck in a piece of fruit that jams the straw?

Have you ever had a piece of ice in your garden hose when you try to wash your car during the winter months?

These examples are a lot like what happens in your fuel system when the filter gets clogged. Your engine isn’t happy when it’s not getting the full flow of fuel it needs, so it will run like crap.

Now that you know a bit about how your fuel system works and what the fuel filter does, let’s take a look at the main signs of a clogged fuel filter.

When you put your key in the ignition and turn it to the start position, your car’s starter cranks the engine until it starts running on its own (without aid of the starter). Generally this happens pretty quick, with one or two cranks. But if your fuel filter is clogged, it may take several cranks before the engine starts. This happens because not enough gas is getting to your engine. Here’s a video that shows an example of a hard start.

When you accelerate hard or drive up a hill, your engine works harder. Therefore it needs more gas and the flow (or pressure) in your fuel system gets stronger.

To help understand this, think of your kitchen faucet. You turn it on to a trickle to fill a small bottle. This is like flow in your fuel system under normal driving.

Now, if you use your kitchen faucet to fill a large pot, you’ll turn it on full blast. This is like flow in your fuel system under hard acceleration.

So when your car needs this stronger flow of fuel to accelerate, and the flow is blocked by a clogged fuel filter, your engine will sputter and hesitate. This happens because your engine is not getting the full amount of fuel it needs to work harder

Given that a clogged fuel filter will get in the way of gas reaching your engine, it only makes sense that your car will stall. If the engine isn’t getting fuel, it won’t run. Simple.

Another sign of a clogged fuel filter is random engine misfires. Because less fuel is going through the system, fuel may not be properly delivered to the fuel injectors. The result is a misfire. This is very similar to the hesitation we discussed earlier.

Misfires tend to make the engine feel very choppy. If you’ve never had the pleasure of experiencing a misfire, check out this video. The misfiring in this car is extreme…. A clogged fuel filter probably wouldn’t cause this much misfiring. But the video gives you a sense of what misfiring is.

The fuel pump, as the name implies, pumps fuel from your car’s gas tank, sending it to the engine. When flow becomes restricted because of a clogged fuel filter, the fuel pump has to work extra hard to make gas flow through the system. When this happens, your fuel pump will likely start to make all kinds of crazy noises because it is straining to work properly.

Consider these noises distress calls… your fuel pump is working harder than it is supposed to and it will eventually wear out and fail.

Check out this video to hear what a straining fuel pump sounds like:

Everything you just learned about are signs of a clogged fuel filter. It’s important for you to know that if your car is doing any of these 5 things, there’s a chance something other than a clogged fuel filter can be causing the problem. A bad MAP sensor, worn spark plugs, and a bad fuel pump can cause some of these same signs.

Ah, the joys of having car problems! Things aren’t always easy to diagnose and fix.

I’ve had a lot of questions from people who have had clogged fuel filters. You might have some of the same questions yourself. So let’s take a look at some of them…

Why does my fuel filter get clogged?

Fuel filters generally filter out the big particles of junk that ends up in your gas tank. Stuff like dirt, sand, and rust flakes.

How do all these contaminants get into your gas tank? Well, there’s a variety of reasons.

You get the idea. It’s pretty easy for particles to find their way into your tank.

How can I prevent my fuel filter from getting clogged?

There’s not much you can do. But remember… the whole purpose of having a fuel filter is to protect your fuel system and engine from the things that contaminate your gas. If you change your fuel filter regularly, you will likely never have a clogged fuel filter. This is an intentional segway to my next commonly asked question…

How often should I replace my fuel filter?

Just like everything else that has to do with cars, there’s a bazillion opinions on the correct interval. I’ve heard things from every oil change to never.

The answer to this is simple: follow what your car’s owner’s manual says. The engineers who designed your car know best.

Can I change my fuel filter myself?

Most likely. It’s a pretty easy job in most cars. It could be a job that you complete in less than an hour.

But no two cars are the same. And some cars may have their fuel filter located in hard-to-access spots that can make the job more complicated.

To give you an idea of what it’s like to change a fuel filter, O’Reilly Auto Parts has a pretty good video that shows what it takes to do the job. Check it out here:

I hope this article has helped you identify the signs of a clogged fuel filter. If you end up having to replace your fuel filter, it’s a fairly routine job that  you can most likely do it yourself. And if you can’t, your local mechanic can probably get it done for you for under 200 bucks.